There are soo many titles we give ourselves with respect to our diets and what we choose and choose not to eat. Vegan, Pescitarian, Paleo, Raw, and the list goes on. Every few years it seems like there's a new diet bandwagon to jump on. Atkins, the Hcg diet, the cabbage soup diet (ew). I've tried a lot of diets, not really any of the more extreme ones, but defenitely most of the lifestyle choices. I was vegetarian for the better part of 10 years. I've tried Vegan on and off, and even recently the Paleo diet.
Wait, what? Vegan to Paleo? It might seem absurd to have that 180 degree switch but for me, being a busy mom and needing enough energy to get through the day with my baby girl, and still have the stamina to hang out with my husband when he gets home from work, finding an appropriate diet means more than what my personal preferences are. It means narrowing down what works for someone who doesn't have time to spend hours cooking meals every day and yet not eating pre-packaged foods (for the most part). For me Veganism caused me to actually gain weight, I think mostly because of my intolerance to many beans and legumes, which are the trademarks of a healthy vegan diet.
Probably the lack of protein in my diet led me to be unable to resist the more unhealthy foods available. That licorice in the cupboard practically called my name and that bag of potatoe chips didn't seem like such a bad idea for lunch when I had only had a Vega shake for breakfast. I want to emphasize here that I think everyone should eat what works for them. This is not a space to put down any person's diet choices. A fellow mother once told me her motto when speaking to other mothers about their parenting choices. It was simple. No Judging. I thought that was great and defenitely strive to apply that to other peoples dietary restrictions. Whatever works for you I say. Who are we to judge what someone else chooses to eat. LIke I said, at the end of the day you have to do what works for you and your family, because they are the most important.
But back to the facts. In truth I went from Paleo to Vegan to back to incorporating some meat into my diet. Why?


I had heard of Paleo before, in my fitness magazines, and thought it was restricted to tough looking woman who could out bench press any man and who used words like deadlift in their every day vocabulary. But then my sister told me her and her boyfriend had tried it, had both felt great, and had both lost weight. I think that is the catalyst for any good diet, not just loosing weight, but how we feel. Are you loosing your hair for the sake of a few pounds that will probably just return? Or unable to function because you've had so few calories you don't have the energy to go for a walk with your family or play for hours with your baby? No thanks. Anyway, I tried Paleo for a few weeks and felt great! I lost weight, had a ton of energy, and would have stuck it out further, but after so many years being vegetarian, the idea of eating meat everyday started to get to me. I had seen so many videos of slaughter houses and the images remained imprinted in my head and read enough Peta newsletters to make anyone rethink their meal choices. So I switched things up and thought I'd try Veganism again. Truthfully it was after reading that Jay-Z and his wifey were trying it for 22 days (go to www.22daysnutrition.com for more info). And if the king and queen of hip hop could do it, why not give it a try. But like I said, you've gotta do what works for you. The vegan thing was great and I loved all the healthy recipes I tried and the emphasis on fresh fruit and vegetables and whole grains, but it wasn't really working for me. I was probably carb loading a little much. The point being (I promise I'll get there eventually) I've decided not to worry so much about labeling myself. I'll probably eat mostly white meat and fish (I don't think I could ever eat a cow or pig or game meat for as long as I live, but No Judging right!) and I'll for sure use vegan meals at least a couple nights a week. I mean, its good for the environment, its healthy, and like I said, if Jay-Z and Beyonce can do it, they're always ahead of the game!

So here are my top 10 vegan recipes that are husband approved! I've attached the links below and they are also on my Pinterest account.
1. Easy Vegan Quinoa Chili (http://www.foodrecipeshq.com/?s=quinoa+chili)  I love this. I added 2 cans of no salt added diced tomatoes instead of tomato sauce.  Of all the recipes though this is my husbands least favorite, so to make it more enticing I add the roasted lemon potatoes as a side! He says as long as there are a lot of toppings (avacado, cilantro, hot sauce) he likes it. Boys.... 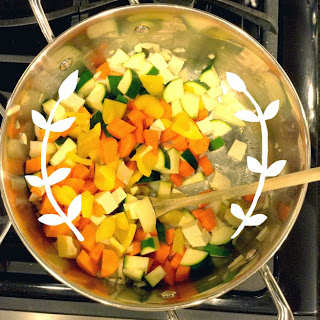 2. Roasted lemon potatoes (www.kayotic.nl/blog/roasted-lemon-potatoes) I've made these twice in two weeks. They are amazing. I would recommend following the recipe exactly. I've tried it without the broth (obviously I would use vegetarian broth if doing this vegan) and its not quite as flavorful. Its nice to add to something like the Vegan Chili to fill up your family!
3. Vegan thai curry with lemon rice (www.nadeinthekitchen.wordpress.com). The lemon rice makes this dish I think so I would spend the time making it. For mine I just made regular brown rice as per the package instructions, then added lemon zest and lemon after. Also, I didn't use saffron but I personally thought it was good without it. Maybe next time!
4. Vegan Indian "Butter" Cauliflower with Coconut Brown Rice (http://fooddoodles.com/2013/04/11/vegan-butter-cauliflower-with-coconut-brown-rice/). This was soo good. I didn't have time to make the coconut rice but hopefully next time I will. Again, husband approved!
5. Yam Fries. I make these a lot. There isn't one specific recipe I try. Basically just peel the yams (some people choose to omit this step it seems, whatever you have time for I guess). A tip I learned was cut off the top and bottom so you have a "table" to slice the yams on. Then, slice lengthwise, so you have slightly round pieces of yam. Cut those again as thick as you want. Put in a bowl and toss with oil and salt and pepper. Bake at 350 degrees for around 40 minutes (the time would depend on the thickness of the yam pieces) put on parchment paper a top a tray and voila! a recipe I would like to try is at http://sweettreatsmore.com/2012/08/grilled-cilantro-lime-sett-potatoes/
6. Quinoa Fried Rice (www.cheekykitchen.com) I think this is my favorite recipe on this list. Who knew tahini and soy sauce together could be so delicious?! I didn't have the black sesame seeds available but it didn't seem to matter. It was still soo good!
7. Spicy Butternut squash Skillet (www.cleaneatingadventures.wordpress.com) I personally think adding the Sriracha makes this dish!
8. Peanut dragon bowl (cookbookaficionado.wordpress.com)
9. Butternut Squash soup. (http://shine.yahoo.com/shine-food/soup-magically-makes-lose-135300788.html) This site emphasized magically loosing weight just by eating this soup. Thats a little extreme I think, but a big pot of soup on a Monday, I think thats always a good idea!
10. Cauliflower fried rice. (http://www.laaloosh.com/2013/10/14/cauliflower-fried-rice/). Just omit the egg whites and you've got an easy vegan, very low carb, dinner!

"Remind yourself. Nobody built like you, you design yourself." - Jay Z
Posted by Unknown at 16:19